On a rainy Fall morning, in a boardroom at OCISO, 18 immigrant and refugee seniors gather around a large table. They may all have different backgrounds, religions, cultures and languages — but yet they are united in spirit and friendship as part of the seniors program.

“One of the objectives of our Diverse Seniors Support Services program is to promote social inclusion and deal with the isolation many older newcomers experience,” says Safia Nawaz, Seniors Program Coordinator, OCISO. “We have designed our program to meet the needs of immigrant seniors.”

Around the table, Fran Mowbray, OCISO volunteer, leads the group in a card game. Hearty laughter accompanies the game, which uses basic math concepts. Fran is retired from working in international development and as a music teacher, and volunteers several times a month with the group. 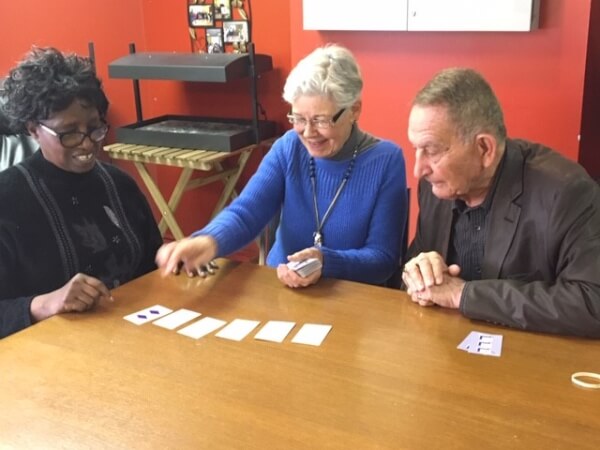 “I want to make a contribution and although I’ve volunteered in different places, I LOVE volunteering at OCISO’s seniors program,” says Fran. “The ambiance here is very welcoming and warm, for both participants and volunteers.”

One of the card players, Rwandan-born Edith Kankindi, arrived in Ottawa in 2014 from South Africa to live with her son and daughter-in-law. “They saw that I was alone in the house when they were at work,” remarks Edith.  Her daughter reached out to OCISO in 2015 and Edith has been a regular participant in the seniors program ever since.

Edith laughs when she says that she only misses the seniors’ activities if she is sick or travelling. “We talk, we laugh and we sing,” remarks Edith who often drums along during the group’s singing sessions. “This seniors group has become like a family to me. I especially have enjoyed the excursions, such as the trip to the Tulip Festival.”

Another card player, Majid Al Yamoory, originally from Iraq, started participating in the seniors program in 2016 when his English was at a level 3. His English has since progressed to a level 8. “Here I have made so many friends,” explains Majid. “We help each other and I practice my English with this group.”

Fran plays a ukelele and leads the group in a sing a long to end their gathering. They sing a song called “Love Grows”. An appropriate song for a program that fights social isolation through laughter, love and music!

The Diverse Seniors Support Services program was established in 2008. The program is run by Jewish Family Services of Ottawa and is supported by six organizations, including OCISO. Last year it served 350 newcomer seniors across Ottawa. Programs are planned and operated with a focus on reducing isolation, building language skill, providing health education including diet and healthy eating, organic gardening, excursions, exercise programs appropriate to seniors fitness, computer and mobile device classes, involving seniors in volunteering activities and supporting settlement and integration for immigrant seniors. The program is part of the Ontario government’s Aging at Home strategy and is funded by the Champlain Local Health Integration Network’s.